On July 25, the City Council reviewed a draft of the 2017 Sewer Rate Study. The study analyzes the cost of providing sewer service and makes recommendations regarding the rate and structure in compliance with state law. The study found that a rate increase is recommended to ensure adequate funds are available to continue to maintain a safe and healthy sewer infrastructure. City Council approved staff’s recommendations, which included sending all property owners and customers a rate notice in compliance with Proposition 218 and set a public hearing for September 12, 2017.  Over 22,000 notices were mailed out on Friday, July 28.

On September 12, 2017, the City Council conducted the noticed Proposition 218 (majority "protest") Public Hearing to accept comments on the proposed sewer rates; and directed the City Clerk to tabulate the results of the written protests received from property owners. The City Clerk announced that 13 protests from property owners were received during the 45-day comment period. After a brief discussion, the City Council approved the Introduction of Ordinance No. 2017-40 and passed it to a second reading for adoption on September 26, 2017.

On September 26, 2017, the City Council conducted the second reading and adopted Ordinance No. 2017-40. In addition, the City Council adopted Resolution No. 2017-61, Establishing Sewer Charges Effective January 1, 2018 and Four Years of Phased-In Increases. On the bottom of this page are two tables, one for Water and Sewer Customers, and one for Sewer Only customers, that outline the new sewer charges, with an effective date beginning January 1, 2018 and the annual adjustments thereafter through January 1, 2022.

Below is additional information regarding the sewer rate adjustments

In November 1996, California voters approved Proposition 218. As a result, California agencies such as the City of Newport Beach, must comply with it's requirements when setting or adjusting utility rates. Proposition 218 requires the City to provide written notice by mail to the owner of each parcel upon which the sewer rate will be imposed.

The Proposition 218 notice contains the following:

Sewer Enterprise Fund: What does the City's sewer bill pay for?

All revenue and expenditures related to the sewer services provided by the City are contained in the Sewer Enterprise Fund, which is separate from the General Fund. Funding for maintenance and replacement activities is collected from rate payers through the Municipal Services bill. The Newport Beach sewer bill covers the following three main categories of expenses:

Sewer Rate Study and why do the sewer rates need to be raised?

All sewer operations, maintenance, and capital improvement projects are funded through the Sewer Enterprise Fund. The last time the City raised its sewer rates was in 2006. Through operational efficiencies, the City has been able to operate and maintain the sewer system without an increase, However, current revenue estimates for the FY 2017-2018 Budget Sewer Fund is $2,571,186 and are insufficient to meet the operational expenditure requirements of $4,592,976. Currently, the Fund Reserve balance is being used to cover the shortfall. Without an increase to the sewer rate, the projected Sewer Enterprise Fund balance will drop below the City Council Reserve Policy in one year and will be completely depleted in two years.

A customer’s sewer bill is a component of the Municipal Services statement sent to City sewer customers. The recommended structure of the rates remains fairly unchanged and includes a fixed and a variable rate. Currently, the sewer rates include a fixed fee, sewer use charge and two additional surcharges of $2 per month for each additional dwelling unit and $10 per month for customers with two-inch or larger water meters, respectively. The proposed rate structure eliminates these surcharges and adds the costs to the monthly fixed charge.

The Sewer Rates for customers that receive WATER AND SEWER SERVICE from the City includes:

The Sewer Rates for customers that receive SEWER SERVICE ONLY from the City include:

Sewer Use Charge - a monthly charge that combines a charge based on water meter size and a consumption charge based on average use for that meter size. (The table below is for Newport Beach residents or businesses that receive their water from either Irvine Ranch Water District or Mesa Water District but have their sewer service account with the City of Newport Beach.)

The table below provides the Sewer Rates and their effective dates for both types of charges. 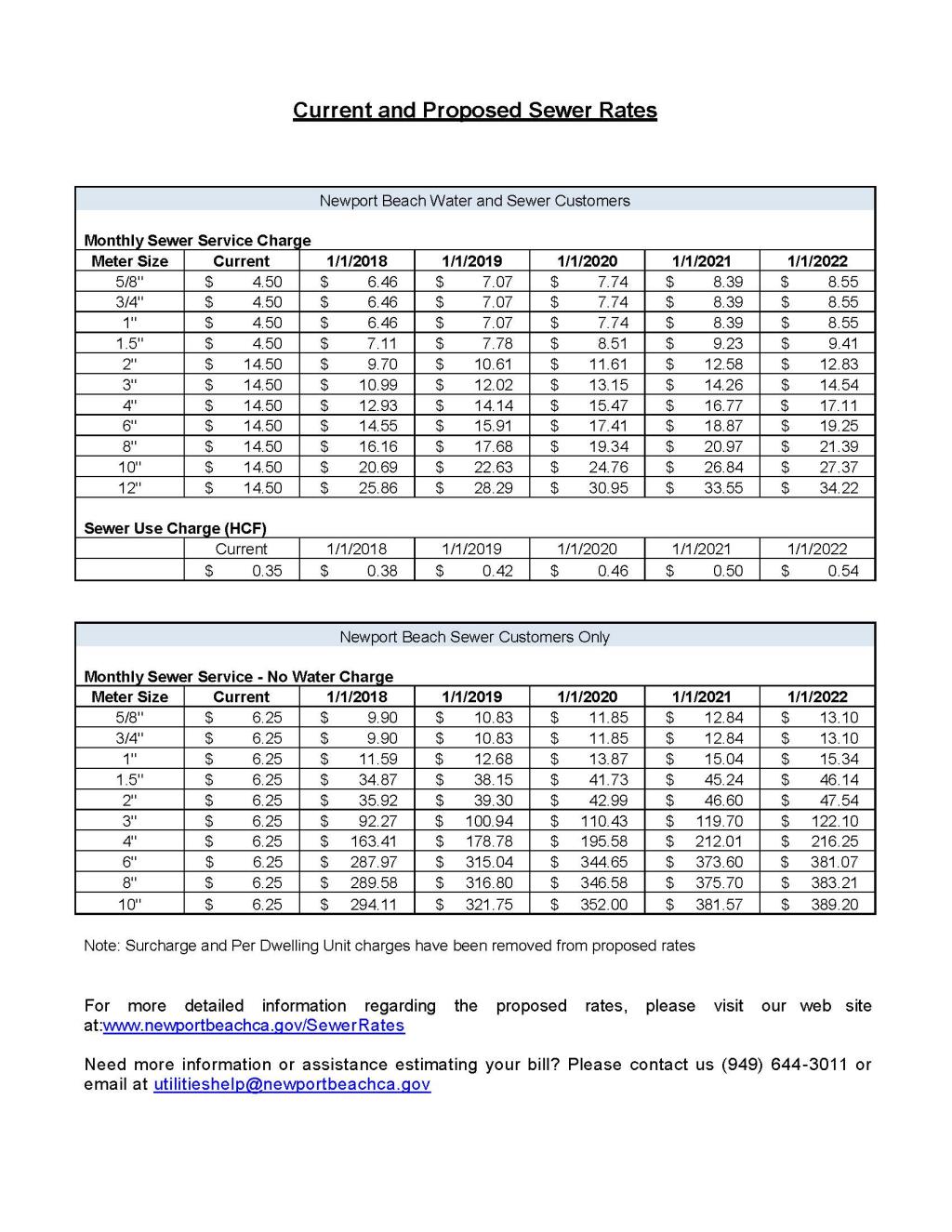