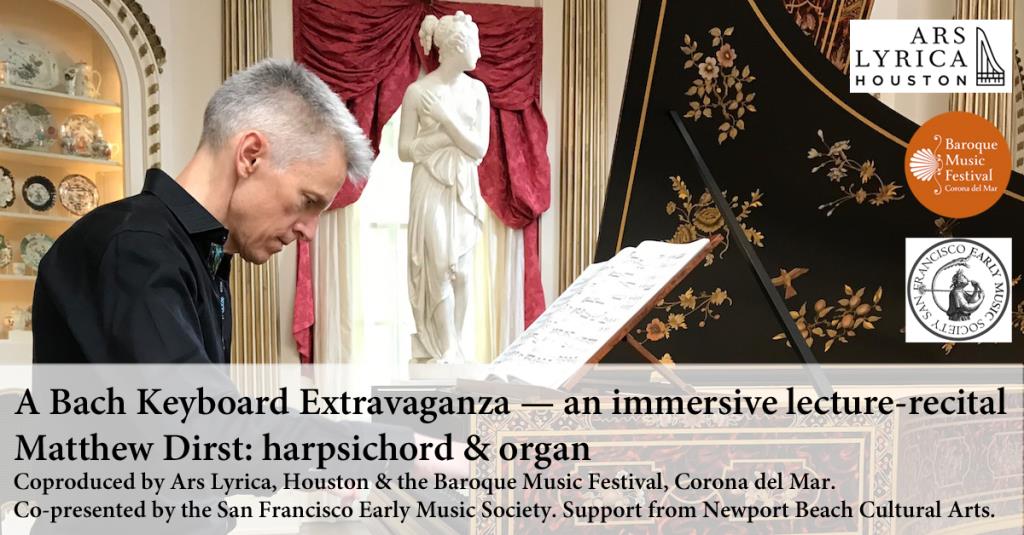 About the Artist
Matthew Dirst, recently described in the Washington Post as an “efficient, extremely precise
conductor who has an ear for detail,” is the first American musician to win major international
prizes in both organ and harpsichord, including the American Guild of Organists National
Young Artist Competition and the Warsaw International Harpsichord Competition. Widely
admired for his stylish playing and conducting, Dirst leads Ars Lyrica Houston, a periodinstrument
ensemble with several acclaimed recordings, one of which—J. A. Hasse’s Marc
Antonio e Cleopatra—was nominated for a Grammy Award in 2011 for Best Opera. His degrees
include a PhD in musicology from Stanford University and the prix de virtuosité in both organ
and harpsichord from the Conservatoire National de Reuil-Malmaison, France, where he spent
two years as a Fulbright scholar. Equally active as a scholar and as an organist, Dirst is Professor
of Music at the Moores School of Music, University of Houston, and Organist at St. Philip
Presbyterian Church in Houston. His publications include Engaging Bach: The Keyboard Legacy
from Marpurg to Mendelssohn (Cambridge University Press, 2012) and Bach and the
Organ (University of Illinois Press, 2016).

About the Baroque Music Festival, Corona del Mar
Directed by Baroque violinist Elizabeth Blumenstock, the festival typically offers five
professional concerts over eight days every June. Programs include the talents of extraordinary musicians
playing Baroque instruments, and of singers who are sensitive to historical styles, performing in
intimate venues in Corona del Mar and Newport Beach. In 2020-2021, the Baroque Music Festival offered a number of
virtual events: visit bmf-cdm.org/videos to watch them at your leisure! The festival’s mission is to
present the astounding wealth and diversity of the Baroque era in a wide variety of ways. Largescale
works, with and without singers, are typically offered on their Sunday concerts, while their
three mid-week programs give the opportunity to enjoy smaller scale vocal and chamber
performances, all given by the finest musicians in the historically informed Baroque field.